On friday 13th of march we’ve been to the northern side of the park territory, on the Dutch Cap, to do an unusual activity: explosion cleaning. Few days before a World War II Nazi bunker mysteriously exploded, leaving many debris of different shape and dimension on the shoreline. Police is still investigating. 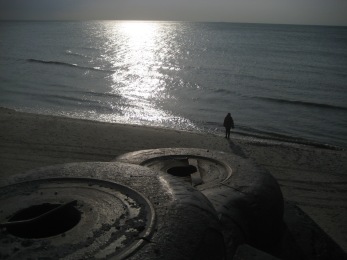 You have to know that the Lithuanian Baltic coast is full of bunkers and remains of Soviet and German occupation during the Second World War, which are now in ruins, even if some of them are in good condition, and they host small expositions. 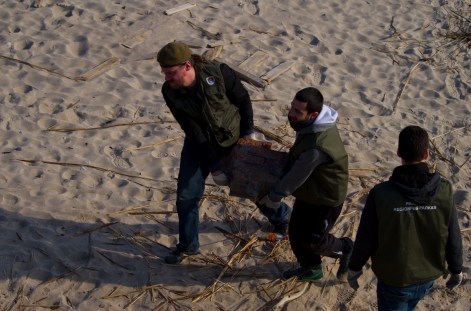 Basically we had to take the debris and put them down the bunker to leave the beach clean: in an hour of work we managed to cover a wide area, but there’s still much to do: the explosion spread bricks and stone for several meters on the shoreline. Staying on the beach was really good, also because this kind of manual work, in nature, frees my mind and gives me time to think about what I like, and I can be useful even staying away from the office and the city. 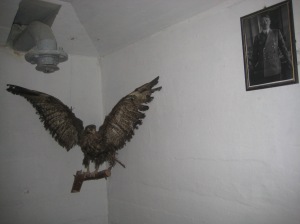 After cleaning the northern side of the bunker, our efforts have been rewarded with a visit inside one of the Nazi fortifications: inside we could find some documents and classical Nazi stuff like an embalmed eagle and a picture of Hitler. Also there was original artillery like bombs and pistols.

But the best reward came later, when the mentor bought for us some local beer to refresh ourselves after the struggle.

Another day of “hard” work, nature and relaxing fun in Pajurio!